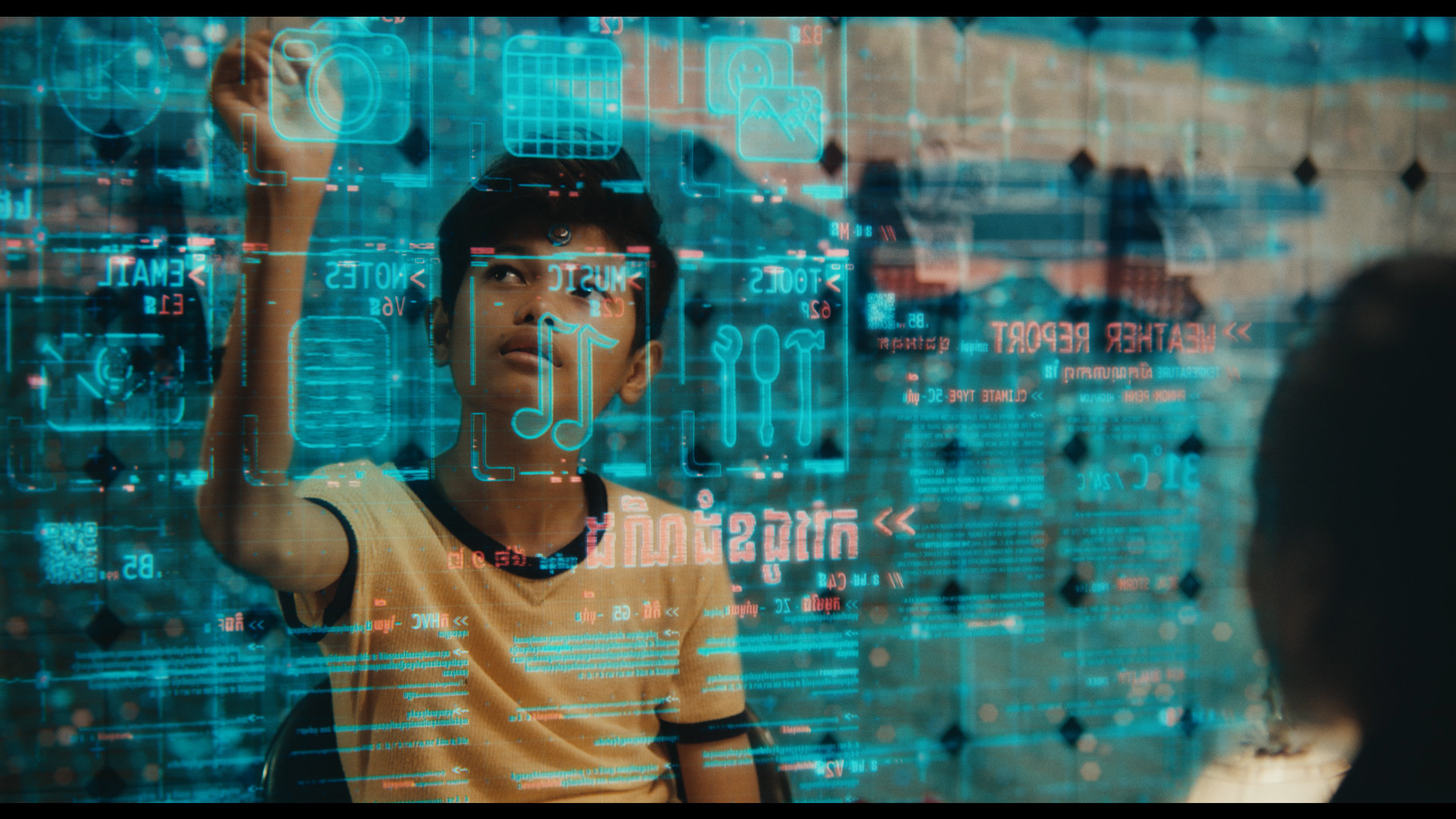 Spoiler Alert: If you don’t like knowing anything about the end of a film before you watch it, click away! Comeback after you’ve watched Karma Link and read this fabulousness . . .

Who remembers spiritual cinema, the early-2000s trend, which promoted feature films with messages of uplift and inspiration? Few of these spiritual-cinema entries addressed macro-societal aspects of living in the 21st century, such as globalization and unequal impacts of the digital era. These overlooked issues are engaged head-on in Jake Wachtel’s well-plotted Karmalink, a Cambodia-set SF film that this summer opened the Venice Film Festival out of competition.

During his time teaching filmmaking in that country, Wachtel came up with the movie’s premise: two adolescents, from the poor but gentrifying urban neighborhood Tralok Bek, track down a golden statue stolen from Wat Phnom temple around the time French colonialists were making away with many Cambodian religious icons. Srey Leak, a cranky, observant, street kid and self-styled “detective,” tries to help her new friend, spacey and sheltered artist, Leng Heng, solve the mystery of his vivid dreams. When Leng sleeps, he witnesses the experiences of unknown characters from his country’s history; the children feel these dreams indicate memories of his (Buddhist) past lives…though they turn out to be of a much more sinister, cyberpunk-y origin.

Through such “memories,” audiences view the US bombing of Cambodia as lived through by another child, Vattanak Sovann, and other moments in the country’s colonial history—such as a Cambodian translator trying to photographically document Wat Phnom’s religious objects before the French make off with these cultural treasures— experienced by various Cambodian characters who are witnessed by the sleeping Leng.

Wachtel and his cinematographer Robert Leitzell capture gorgeous Phnom Penh and Tralok Bek locations, including temples, gravesites, rice paddies, and forest-shrouded pagodas. But Wachtel’s gritty script lets the audience know at every turn how at-risk these children are due to the imperial legacies of France, the US, and China: how precariously they live within the grimy economic landscapes of global salvage capitalism. Orphan Srey Leak is made houseless by developers who, early in the film, sell her and her older teen brother Kosal’s rental home to create an AUGR (grafted digital brain augmentation) café for gentrifiers moving into the neighborhood. The resourceful girl had been paying for the siblings’ lease by finding old computer chips in the refuse of that landscape, exchanging them for hard drives with another scavenger (an older, female mentor who instructs Srey Leak in lockpicking) who is also making trades off of a local junk pile, then in turn selling these salvaged drives to tech black-marketeers for rent money.

Leng Heng’s family are also being kicked out of their modest house, along with everyone in railway-adjacent Tralok Bek, as the village chief has made an arrangement with a development company to raze down the area where families have lived for over three generations, to construct tracks for a bullet train to China. The company will pay and relocate community members 15 km away, dividing them from beloved neighbors and friends known all their lives. Leng Heng’s mother organizes anti-development demonstrations but she and her neighbors are losing the fight.

“Those hipsters are ruining everything,” critiques Srey Leak of the moneyed newcomers who purchase AUGRs, the third-eye-grafted brain augmentation, which allows clients to interact with cool digital dimensions of the economically stratified, physical world in which they live (e.g., audiovisual embellishments of local raves, which only augmented people can perceive). Srey Leak is both critical of losing their neighborhood and pragmatic, eking a living from the remnants left behind by previous waves of industrial capitalism in their city. Ultimately, it is Srey Leak’s “borrowing” of the AUGR device belonging to Leng’s family that helps solve the mystery of the boy’s dreams—pitting him and his tough female BFF against an older Vattanak Sovann, who turns out the film’s surprise (if antiheroic) villain. After surviving the bombing, Sovann had immigrated to the US, found scientific success there, and returned to Cambodia to exploit these neighborhood children’s economic and political precarity by surveilling their brains in order to conduct his “revolutionary” neuroscience research.

“I am the owner of my karma. Heir to my karma. Born of my karma. Whatever I do, for good or evil, to that I will be heir,” is the mantra Vattanak chants at the start and the climax of Karmalink. This is not the first film where advanced science, such as nanotechnology, cannot overcome age-old moral prescripts. But it is the first one where tween adventure that is couched in not-so-subtle critiques of the global economy and its digital divide drives home a religious lesson. 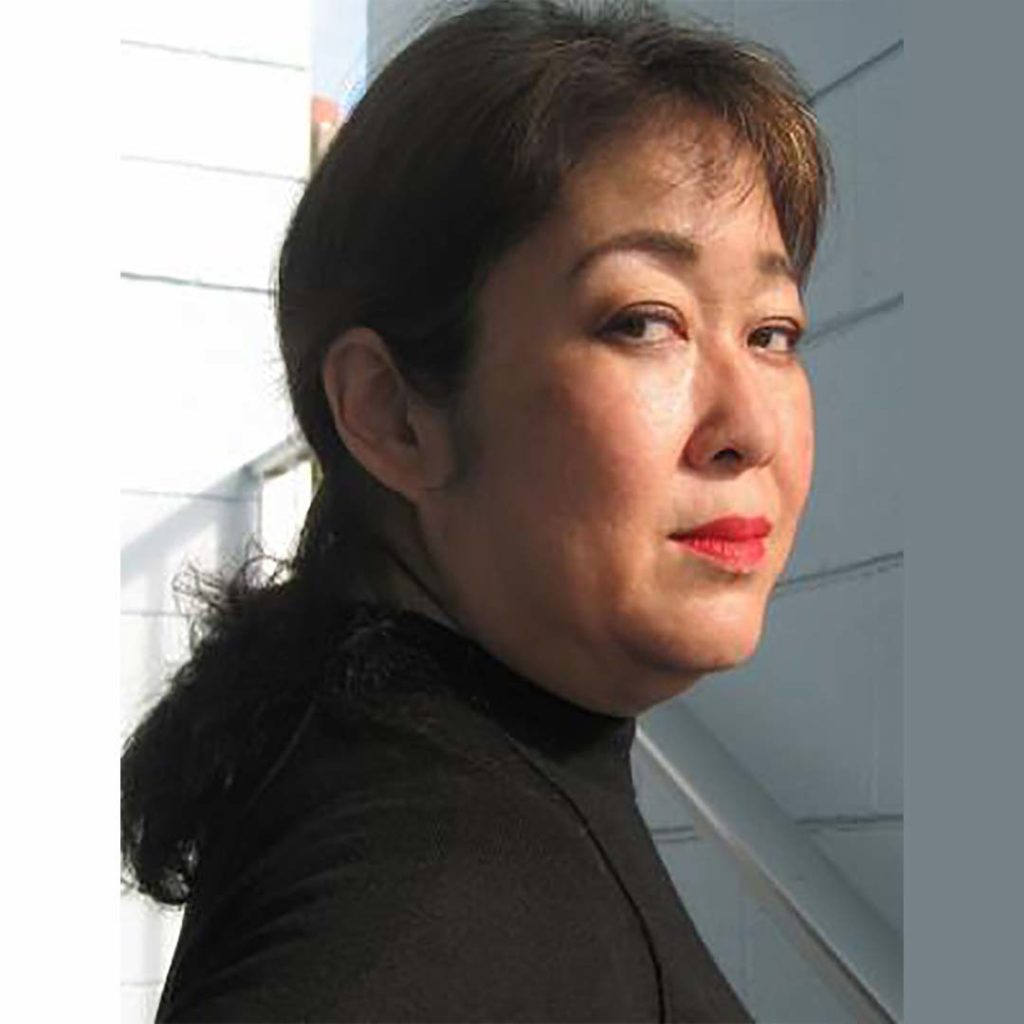 Country Maui mouse, Ida Yoshinaga, spent two and a half decades studying culture in the big city of Honolulu (earning her Ph.D. at the University of Hawai‘i-Mānoa, Department of English, where she studied feminist film narratives, genre theory applied to science fiction and fantasy, and critical approaches to mass-media art), before relocating to metrocapitalist Atlanta.  A 20th-century remnant who still talks of telexes and pagers, she amuses her Xennial students in their classes on science-fiction film. She represents NETPAC/USA on the HIFF jury and watches entirely too much TV in the name of scriptwriting studies.

Listen to Ida Yoshinaga and Jake Wachtel discuss the intricacies of making a film like Karmalink. They grapple with all the questions ranging from the often messy creative process of bringing a film into being (Take an idea and make it a movie!) to responsible production practices (How do filmmakers respectfully work within communities?) to community involvement (Integrate the local community into all levels of the production process.) to cultural authenticity (How do storytellers ethically tell stories in places that are not their own?).