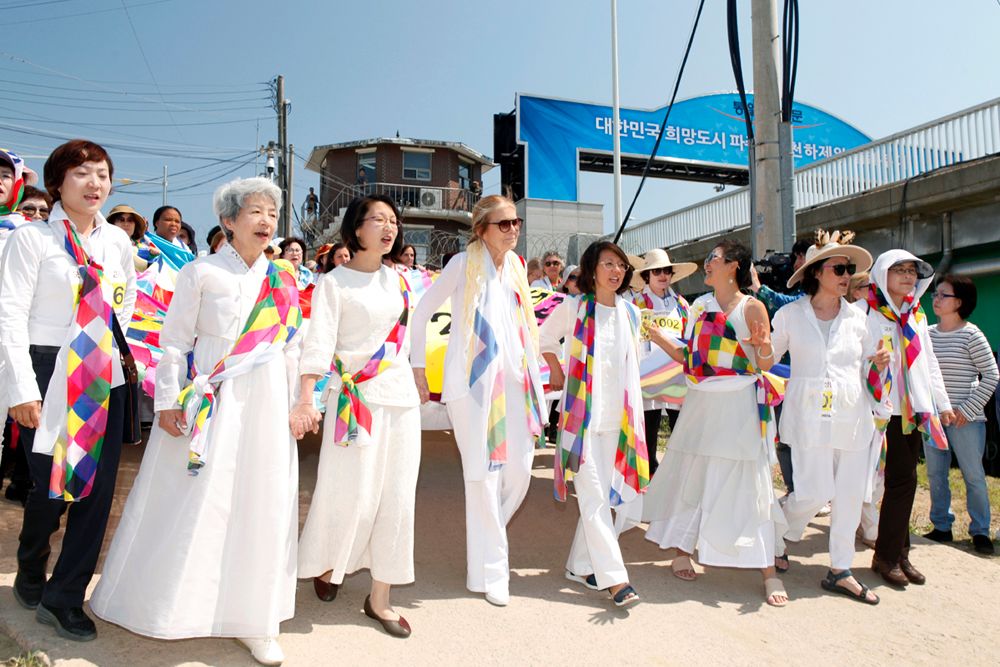 In 2015, an assembly of women who wanted to take a walk, raised a stir on the Korean peninsula. Their intention was simple, gather, talk, and sew—to create community through the simplest of acts, and to make imaginable a vision of peace on a land torn apart for generations by the violence of Japanese colonialism, American militarism, and Korean statecraft. Deann Borshay Liem’s Crossings, a documentary about the peacemakers who organized the controversial action of not only entering North Korea but also crossing the DMZ to call for a peace treaty does not shy away from the diplomatic complexities and tactical missteps of this historic undertaking, but keeps a steady hand on the heart of the story, which is the power of women’s voices in building peace.

This crossing, is of course, anything but simple, nor are the women naïve and inexperienced. After being stymied and threatened by the South Korean government, the U.S. military, and human rights activists, Christine Ahn, the event’s main organizer, asks “What are we doing that is so threatening?” The film lays out the answer: Liem makes clear from the beginning that while built on hope, the symbolic act of the walk was daring in its rejection of an armistice as adequate. Motivated by personal experiences of how war’s burdens fall heaviest on women, the women were pragmatic and purposeful, informed by work in peacebuilding

which has both sustained them and demanded sacrifices big and small. Their call for peace makes imaginable something different than a mere ceasefire coupled with escalating militarization. While they understand that peace is not easy, they also lay bare just how much effort it takes to wage war.

Liem’s film lingers over the quilt that comes to symbolize the stitching together of the stories, dreams, and voices of Korean women and peace activists around the world. There is something powerful and compelling in the images of hands pulling needle and thread through cloth to create a tangible repository of the determination, creativity, and power of women’s work. The film itself is a kind of quilt, too. In it, Liem pieces together stories of activist predecessors who called for unification and peace, the testimonials of North Korean women recounting the horrors of the Korean War, the brief but superficial and staged glimpses into the lives of North Korean women, the delegate’s struggles with how their feminism translates in a foreign cultural milieu. The work of peace, the film implies, is not always beautiful or evenly stitched, but it is durable.

The quilt—that most domestic and feminized object—made by suturing together cloth of different textures and colors, is juxtaposed with the long-open wound that is the demilitarized zone, with solutions that are steeped in division, borders, and military posturing. The contrast is stark, and the worlds imagined could not be more different.

Liem tracks the aftermath of the crossing—a story of dashed hopes for peace waylaid by the puffed up posturings of US-South Korean military exercises and dangerous bloviations of heads of state. Abandoning possible talks that might have paved the way to peace, former President Trump crows, “Sometimes you just have to walk.”

Sometimes you just have to walk. Despite the postponement of their hopes for peace, the women who took an entirely different kind of walk in 2015 turned this advice—of abandonment and renunciation—on its head. Instead, they continue to walk their talk, building a global campaign for a Korean peace that that is calling a new future into being.

Sometimes the most powerful actors are not the ones armed with guns and tanks, but the ones who wield an imagination of a world that is absent of both, a world otherwise.

Vernadette Gonzalez is Professor of American Studies at the University of Hawai‘i at Mānoa. She writes about cultures of U.S. militarism, tourism, and wayward women.

Watch Film for Thought scholar, Vernadette Gonzalez, talk story with Deann Borshay Liem,  Christine Ahn, Mimi Han, and Ann Wright. Their conversation is moving, heartfelt, and inspirational for a future Korea no longer defined by the boundaries of war.