Lee Tonouchi, deeply involved and committed to the Hawaiʻi literary community for over three decades, has won the Tony Quagliano Poetry Award. 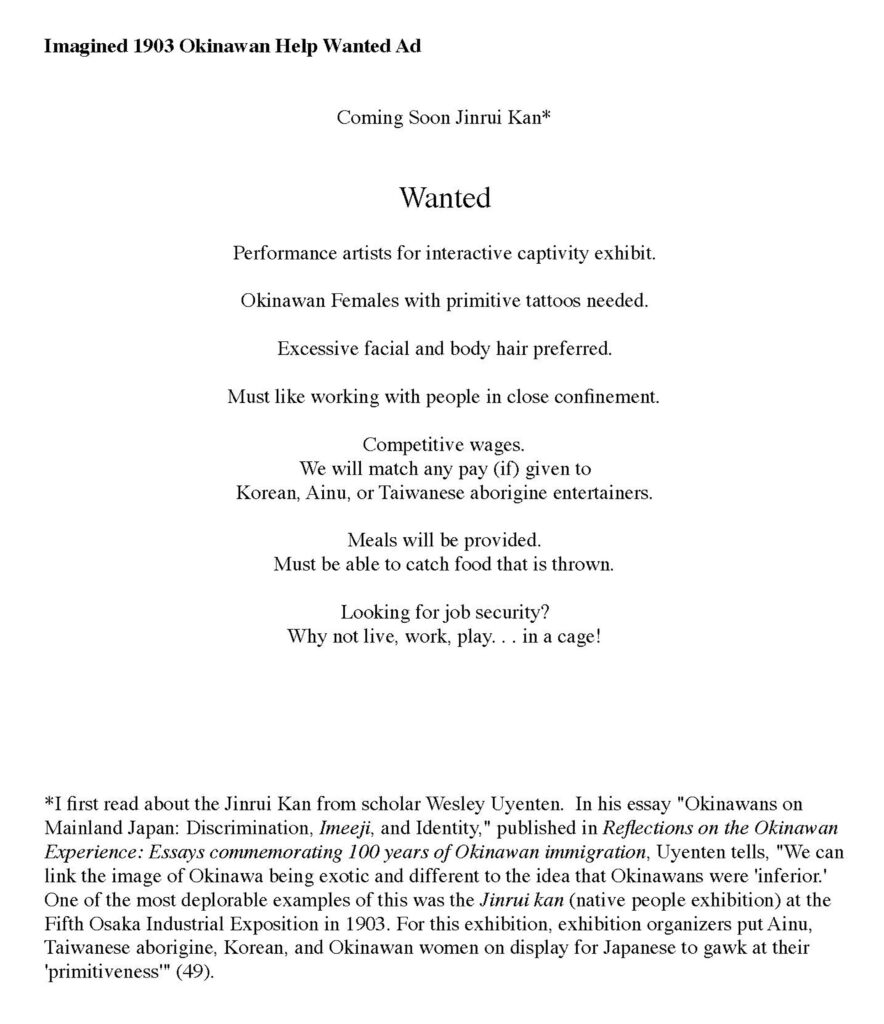 Hajichi: Tattoos and Diamonds is Forevah

I cannot tell
if her hands shaking
cuz she nervous
dat going hurt
or if it’s cuz
of da forbiddeness
of her ack,
dat she’s here despite
her fiance’s wishes.

Like us,
her fiance’s one Local
Okinawan too
but he’s not down
wit da whole idea.
He said getting da tops
of her hands
tattooed is barbaric,
and he equated da practice
to branding
and treating women
like possessions.
Ironically,
he suggested he
could create one design
for her
instead.

I come involved
when she calls me up
and asks me if I
know anyting
about hajichi.
I tell her I no tink
it’s about da husband
doing ‘em to da wife
saying you belong to me,
and I share wit her
da Okinawan myth
my grandma toll me,
da one about da princess
who marked her hands
so dat her pirate capture,
whose personal preference
wuz for hands
sans anykine markings,
would find her repulsive
and set her free.
I tell her
to me, da story’s
about how da princess
uses her ingenuity
for defeat one more mighty-er
enemy.

An’den da Japan government
banned
da shaman women of da villages,
who did da hajichi tattoos,
from practicing their artform,
in order for allow for one more
homogeneous culture
and easier assimilation
of Okinawans into Japan.

Some Okinawans believed
dat da hajichi ban
wuz one excuse
for round up and imprison
da Okinawan women elders
and break up
their power.

Yet,
despite da fack
dat their culture wuz one crime
many Okinawan women
still continued for get
their hajichi,
as their act
of
resistance.

As my friend passes da photo
of her great grandma’s hajichi
to da tattoo artist.
I tell her she lucky she get
dat photo.
I ask her
one more time if she sure.
If she sure, she sure.
Cuz what if her husband-to-be
calls off da wedding?
I remind her dat both
tattoos and diamonds
is forevah.

She looks at da back
of her hand
as she reminds me
dat even in Okinawa
hardly get any women
wit hajichi anymore.
So even though her fiance
might not like how it looks,
it doesn’t matter
what he thinks,
because to her
it’s
beautiful,
it’s very beautiful.

I ask my Grandma hakum
in every family picture
Obaban stay sitting down
with her hands on her lap
wit her palms face up.

Grandma sez
when Obaban came Hawai‘i
she wuz shame
cuz none of da oddah women
had dat kine
Okinawan tattoos
on da backs of their hands.
Das why whenevah she went out
no mattah how hot,
she always
wore gloves.

Obaban even toll Grandma
dat when she she ma-ke time
make shua her hands
get da glove on
when she stay in da casket.
Grandma sez
she made her promise.

I ask Grandma
if Obaban wen stay in Okinawa
den would she have been
not shame?

Grandma tells me
she heard stories
dat in da schools ova dea
if dey caught you speaking
Uchinaguchi
you had for wear
da hogen fuda sign
around your neck
as your punishment
marking da fack
da way you spoke
wuz inferior.

I still no get it.
How can? I ask.
How can be shame Okinawa
when you
IN
Okinawa?

“Like da ‘mainland,’”
I repeat.
And das when
all of a sudden
I can relate li’dat,
you know da kine.

Reading Tonouchi’s work is like being invited to share in the supple imagination of a maker. His poems, immersive, layered, mischievous, dart around with an intense energy, circling and recasting loss, survival, and intimacy in a community and world made of Pidgin.

Tonouchi’s “Imagine 1903 Okinawan Help Wanted Ad” launches a through-line of otherness and the question of performativity:  Where does it happen? and Where does it end? Written primarily in Pidgin, Tonouchi’s poems resist oversimplification, unwilling to offer easy virtue or a moral high ground to the reader as even the speakers’ positions shift throughout the work. This perspectival joinery would give rhythm to stories, really the work of life per Tonouchi’s vision. Like N. Scott Momaday (in The Way to Rainy Mountain) Tonouchi has a gifted ear for tonal shifts and mimicry. Not only does he admit that to learn a language is to learn that you don’t need to learn it (“Uchinaaguchi Paradox”), he also makes deft work of juxtaposing quotation and interior monologue so that his poems – multi-vocal, to say the least – get at the details of militarization, from its justification to its micro-presence in Oahu vis-a-vis televised heroes (“McGarrett Would Go”) to tone deaf television/government-speak disregard for a labor force (“Hawai’i’s most Dangerous Job”).

Nor does Tonouchi fall into and out of Pidgin to perform identity. Rather intimacy (shared with us) means – as lifeblood – this is how I know myself/a self, and Tonouchi’s image sets root and grows over timed in our imagination:

So I always wondered
How come dey went plant that for den?
Curious, I see da pokey pokey plant

On da oddah hand it also signifies, Eh, we made it.
Dis house that we worked hard for buy
Is one Okinawan house

And DIS is our flag.   (“How You Can Tell One Okinawan House”)

That is, consciousness turns on a flag, or even a “plaque” – perhaps a subject rhyme for “hogen fuda” – each seemingly static surface does both the inventive and self-reflexive work of marking Okinawan. That Tonouchi has worked tirelessly to increase the visibility of Okinawan literature makes a rich and consistent layer in his work.

“Like da ‘mainland,’” I repeat.
And das when
all of a sudden
I can relate li’dat, you know da kine. (“Palms Face Up”)

And yet his approach to questions about marginalization, or militarization or colonization for that matter, is nimble, telescoping out and zooming in as a matter of distance and intimacy and also as an expression of humor. His awareness twists to and on us. If “Palms Face Up” [to hide one’s tattoos] lends itself to a memory of “da hogen fuda sign”  to shame Unchinaaguchi speakers, tattoos in “Hajichi: Tattoos and Diamonds is Forevah” ends with “If he/don’t like it, he/ can talk/to da hand.”

As a non-Pidgin speaker reading Tonouchi’s Pidgin poems, I wondered where my curiosity could safely land. How close could I get to the poems? And yet Tonouchi’s prismatic language and forms – with great resolve and beauty – generously enlarge the range of the poet’s condition to the human condition. And to my ear, the twisting and twining of tropes and images is most poignant in “Okinawan Proverb.” Perhaps because it starts with an origin claim “Okinawa means “rope in the open sea” and undulates across the page – well, one hopes the form holds its tension but the sense of effacement feels inevitable.  A rope in the water can only be held taut when it is held – or Tonouchi has held out attention rather taut with his poems by breathing life into Okinawan beliefs and language with his offering. 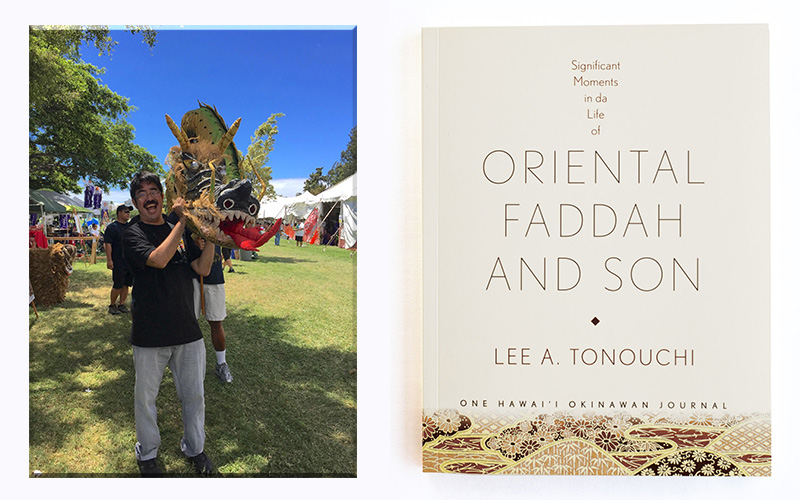 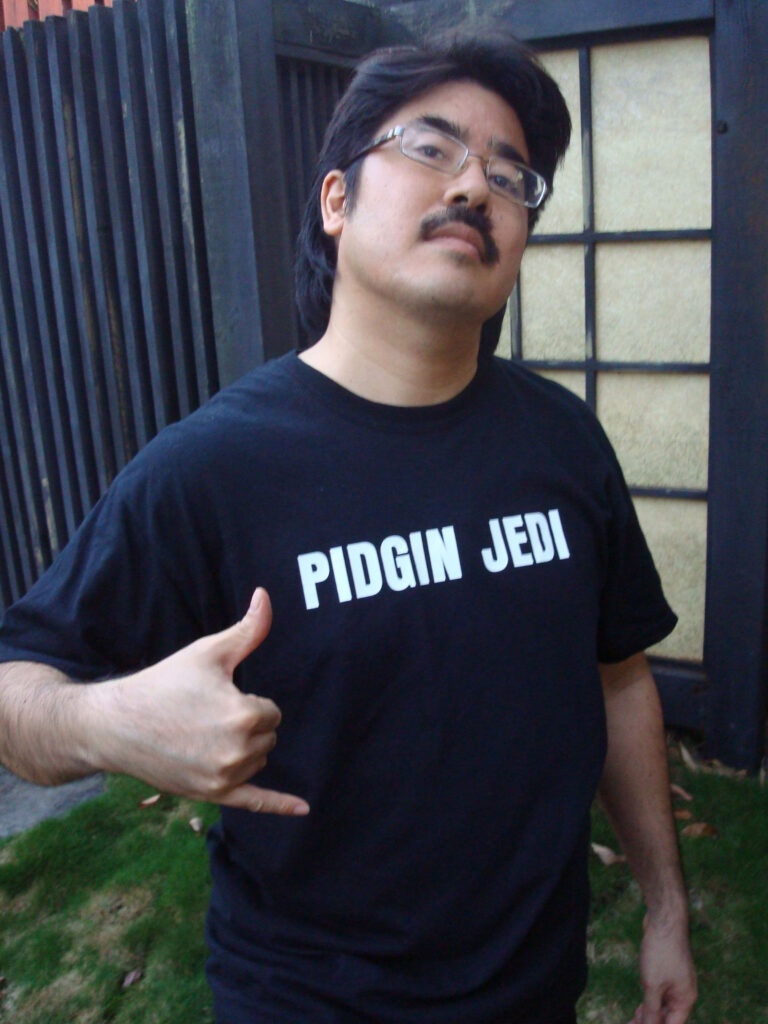 J. Vera Lee has lived in Honolulu for over a decade. Recently her work appeared in Joyland, New American Writing, and Second Factory. She is the librarian at the Honolulu Museum of Art.