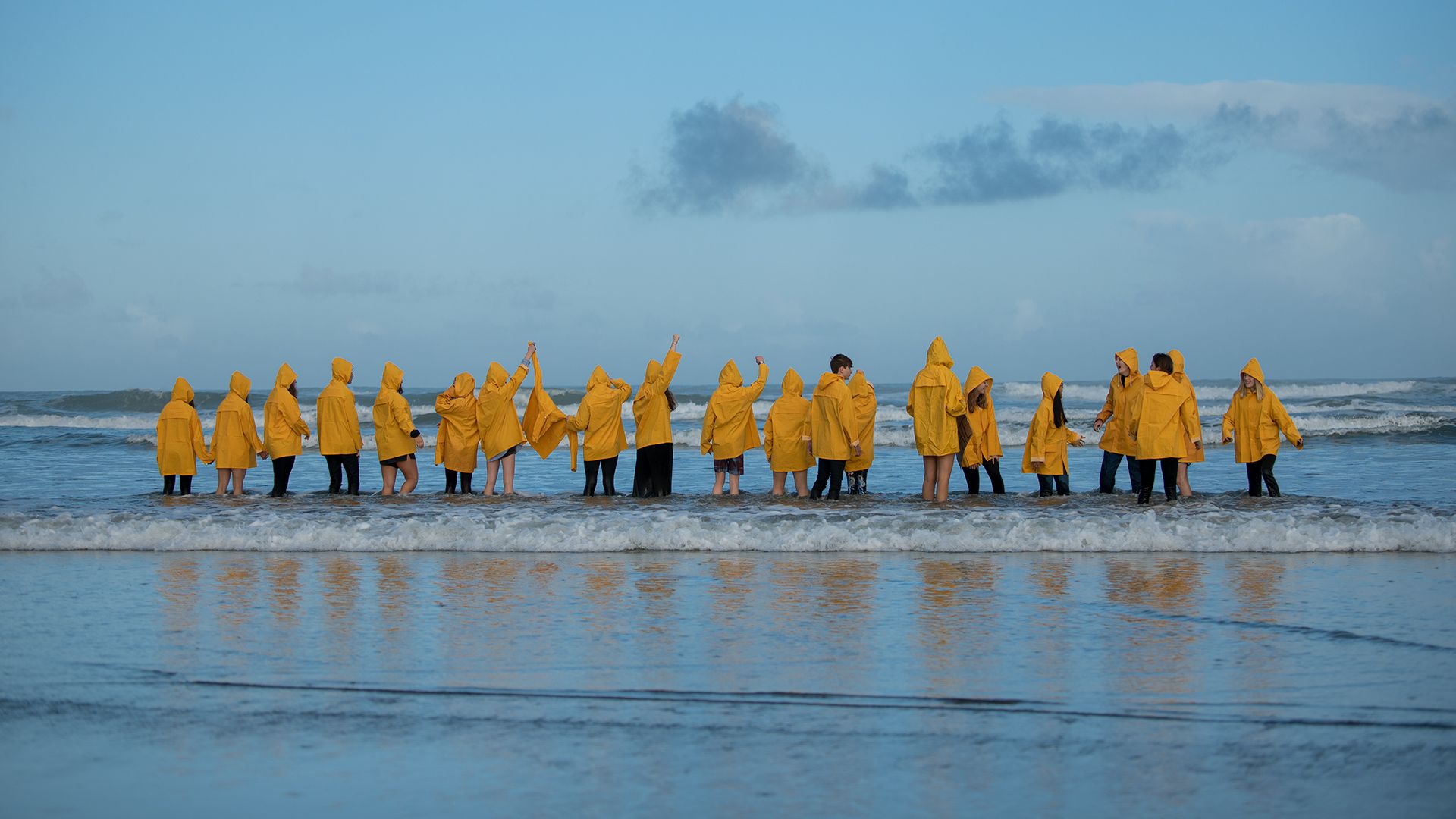 The youth are our future ancestors. The Youth Climate Strike generation, who organized the largest-yet direct action for the climate in 2019, are especially important elders-in-the-making as they mobilize for their future families and generations to come. Emboldened and inspired by Greta Thunberg’s school climate strike movement, high schoolers around the world organized protests of 6–7 million people on the week of Sept 20–27, 2019, just before the UN Climate Summit. Too young to vote, but sharp-eyed enough to witness how political leaders are failing them, these young organizers are learning the importance and hard work of collective action.

High Tide Don’t Hide (2020) introduces us to the wisdom, passion and struggles of five teens who were instrumental in organizing the school strikes across Aotearoa/New Zealand. Directed by The Rebel Film Collective (Niva Kay, Emily McDowell, Nia Phipps and Phil Stebbing), the film follows Lillian Balfour and Helena Mayer from Thames, Sophie Handford from Paekākāriki, and Aucklanders Luke Wijohn and Aigagalefili (Fili) Fepulea’i Tapua’i. As these youth begin to organize their own schools and communities as part of New Zealand’s School Strike 4 Climate (SS4C), they articulate how the future of the environmental movement must move beyond scientific explanations of climate change and begin to address the continued non-action of Western countries to end carbon emissions, as well as the damage that global economic and political systems do to front-line communities around the world. Their demands are clear: zero emissions, sustainability, and adaptation plans that are accessible and accountable to everyone.

The voice of Fili, a Samoan-New Zealander poet, is especially powerful. She organizes her high school cohort from South Auckland’s predominantly Pasifika community as 4 Tha Kulture (4TK) to emphasize that sea level rise is driving cultural elimination across the Pacific. She calls out Deputy Australian Prime Minister, Michael McCormack, for his racist remark that Pacific Islanders can survive because “many of their workers come here and pick our fruit.” She also calls out the SS4C organizers for not inviting the voices of the Pasifika community to earlier demonstrations. As the film progresses, she struggles with the role she and other Black and Brown youth play in the larger climate activist movement and forces a reckoning with the white privilege of Pākehā members of SS4C. As the students learn to create space and support each other, they build momentum for a successful September 2019 march coordinated with unions, Greenpeace and 350 Aotearoa, which effectively blocked the entrance of the Auckland port and leveraged support to pass the Zero Carbon Bill.

The film ultimately leaves the racial and cultural tension amongst the youth activist groups unresolved, welcoming audiences to meditate further on Fili’s frustration that politicians and activists alike continue to tokenize Pacific Islanders and in doing so, ignore the genocidal conditions that climate change is creating across Pacific Islander communities. As a college educator and a community organizer working for climate justice in the Pacific, it is humbling and awe-inspiring to watch youth like Fili, but also Luke, Sophie, Lillian, and Helena, cut so clearly through the dense fog of bureaucratic red-tape and financial funny business that is climate policy, to understand and defend the fundamental importance of all life. Lillian and Helena are able to talk back to local climate-denying politicians, while Fili tells her earnestly religious father that the “Lord says we have to look after the Earth.” Their ability to genuinely enter into divergent conversations with their elders and still hold to their path is a true sign of wisdom. They are not afraid to own their emotions and let those guide their articulation of the truth about climate change.

High Tide Don’t Hide sits alongside a few other documentaries just out on the youth climate movement. I am Greta(2020), follows Thunberg’s own struggles during her rise as a figurehead for the movement. Youth Unstoppable, directed by Canadian Slater Jewell-Kemker, who has been at the forefront of the UN Youth Activist movement since 2009, articulates a longer history of global youth activism and even more deeply explores the need for a climate justice perspective that connects the climate and political atrocities from Bangladesh to the Athabasca tar sands and beyond. But High Tide Don’t Hide, especially as it shares all of the vulnerabilities and successes of organizing for the climate in Oceania, is a powerful story for Hawai‘i’s youth and (future) elders, as we build solidarity with our Pacific cousins.

Jaimey Hamilton Faris is Associate Professor of Contemporary Art History and Critical Theory at the University of Hawai’i, Mānoa.  She is affiliate faculty in Pacific Islands Studies, the Institute for Sustainability and Resilience, and International Cultural Studies. Based in Honolulu since 2006, she’s organized community arts and culture programs both inside and outside of institutional spaces across the Hawaiian archipelago.

Jo-Jikum—an organization supporting the next generation of Marshallese navigate and develop solutions to environmental issues impacting their islands such as pollution, climate change, and nuclear legacies

Julian Aguon, “To Hell with Drowning”

Rise: From One Island to Another by Kathy Jetñil-Kijiner and Aka Niviâna 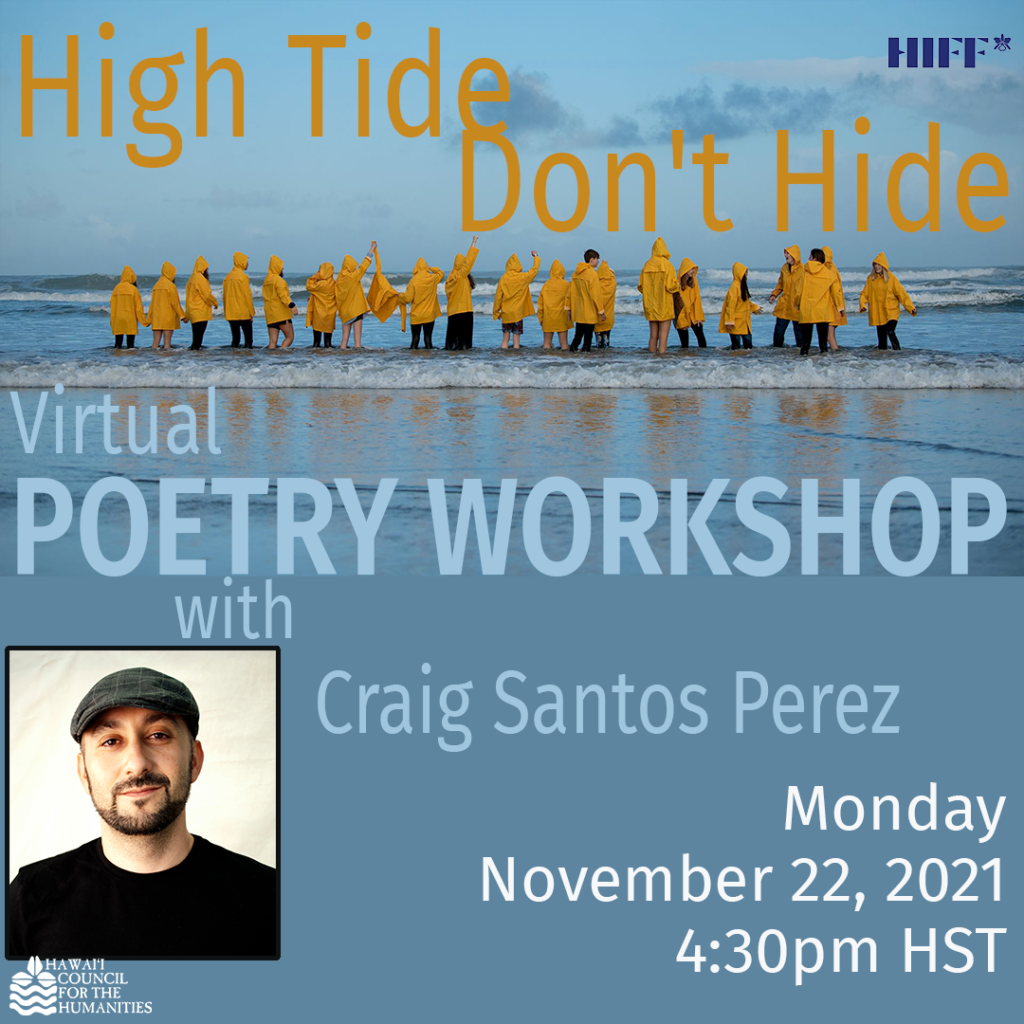