Did you know Hawaiʻi Council for the Humanities was one of the original sponsors of the Hawaiʻi International Film Festival (HIFF)?

HIFF began as a project of the East-West Center in Honolulu in 1981. The inaugural event was themed When Strangers Meet, and 7 films from 6 different countries were shown. 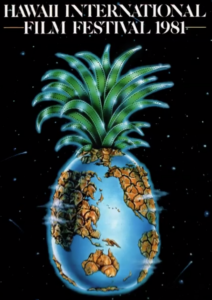 That first festival had an audience of 5000; today, HIFF enjoys an audience more than 50,000. Founded Jeannette Paulson Hereniko, who was also Director from 1981 to 1996, HIFF has grown to be one of the premiere film festivals in the Pacific. Crucial to HIFF’s mission is recognizing new and emerging talent, promoting career development and original collaborations through innovative education programs, and facilitating dynamic cultural exchange through the cinema arts.

Beginning in 2010, Film for Thought (FFT), a collaborative program between HIHumanities and HIFF, was born. Film For Thought is a special program designed to inspire critical discourse and community dialogue through the medium of film. Celebrating the longstanding relationship between HIHumanities and HIFF, FFT features a select group of films that resonate particularly with aspects of the humanities. As part of this programming, HIHumanities invites humanities scholars to respond to these selected films through written essays and panel discussions.